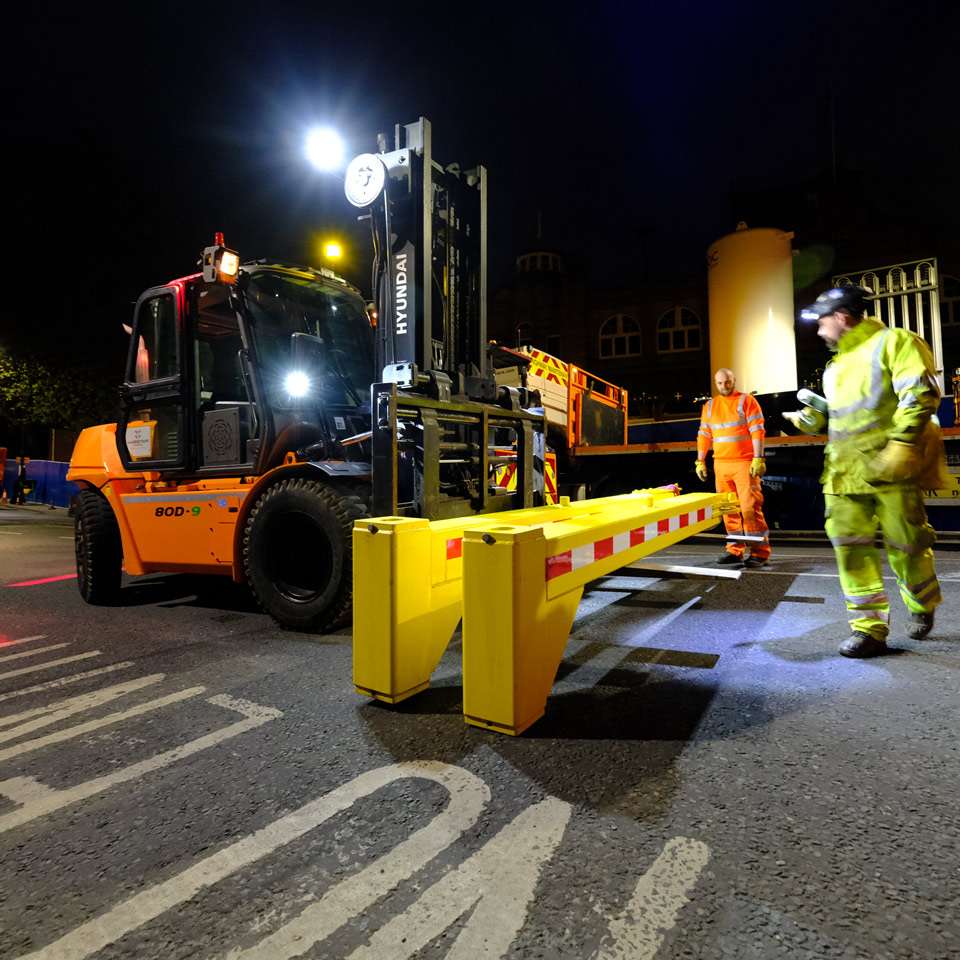 Hardstaff Barriers has recently delivered and installed hostile vehicle mitigation protection to the NHS Nightingale COVID-19 support Hospital, in Harrogate, through its government framework. One of the company’s Hyundai forklift trucks played a crucial role in unloading the kit from the three delivery HGV’s and placing in situ ready for installation.

The NHS Nightingale Hospital Yorkshire and the Humber is a 500-bed COVID-19 support hospital, which was converted from Harrogate's Convention Centre, in under three weeks. The hospital was officially opened by 100-year-old war veteran, Captain Tom Moore on April 20th, in a virtual ceremony.

As part of the conversion from convention centre to hospital, a supporting infrastructure was built within the curtilage of the convention centre. Due to its proximity to the main road a solution was required to protect the new installations from errant or hostile vehicles. Hardstaff Barriers were able to provide a gated linear solution to protect the infrastructure, following a site survey, with a live feed to a designer who was able to share designs with the client in minutes.

The site visit and design took place on 7th April and the installation took place on 9th April and was completed in less than three hours, by a team of five, working within the social distance guidelines. Hardstaff installed two HVM Swing Arm Gates and 30 metres of concrete Quick Moveable Barrier (QMB).

Wes Baker, Fleet and Operational Support Manager, Hardstaff Barriers commented, “The Hyundai Material Handling fork truck assisted with the loading and unloading of the HGVs’.  Since we purchased the two Hyundai’s, as part of our fleet expansion, the trucks have been put through their paces on some high level HVM security projects.  The machines have proved to be both robust and reliable.

The Hyundai was chosen after trials with it and its competitors and was found to be the best matched machine for the Hardstaff operation."

"The machine is short for an 8t machine making it more manoeuvrable in tight spaces which is something we encounter often.”

, these included Red Light Pedestrian Exclusion Zone lighting, and additional lighting for operators, also external ‘seatbelt connected’ and ‘handbrake on’ warning lights were fitted to our specification before delivery. The new machines have been well received and the opinion of the forklift drivers is that the Hyundai is a very good piece of equipment.”

Hardstaff Barriers have been providing temporary and permanent concrete security barriers for the past 27-years both in the UK and Europe. During this time the company has created a range of solutions that include products for highways, street works, perimeter security, and counter-terrorism such as Hostile Vehicle Mitigation systems.

The company also manage the National Barrier Asset on behalf of the National Counter Terrorism Police HQ (NCTPHQ), where the business manages and deploys a range of security barriers, barges and fencing for high-profile events such as State visits and Royal occasions. Hardstaff’s new Hyundai forklifts will be utilised in these operations.