Three Hyundai forklifts make their début at the Focast foundry 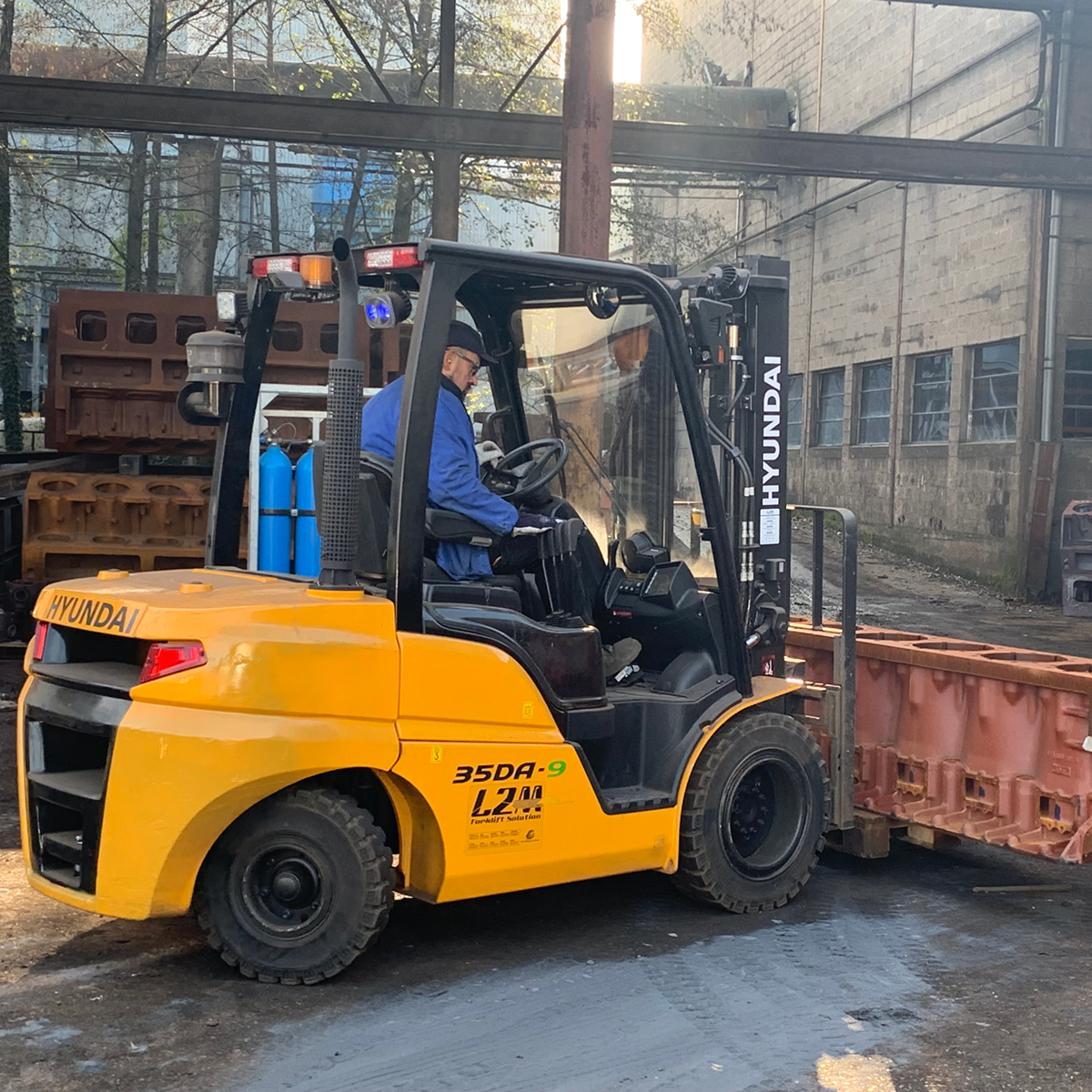 Last year, Focast, a foundry located at Châteaubriant in the department of Loire-Atlantique in western France, took delivery of three forklift trucks from Hyundai Material Handling. This was part of a machinery renewal program, which became necessary for the company to maintain good returns.

Since it was established in 1856, Focast has specialised in fabricating mechanical components weighing between 100 and 9,000 kg, hand-cast using chemically bonded sand. "Our core business consists of the manufacture of cylinder heads, engine blocks, power bridges, axles, hubs, support frames and more. We do not manufacture in bulk, nor do we assemble the components; everything is done manually. We supply the raw component to our customer, and they do the machining" explained Christophe Pimor, maintenance supervisor at Focast Châteaubriant.

"We are considered to be a bit of an "haute couture" foundry, because unlike other foundries that manufacture items in bulk, we only do "made-to-measure" parts"

, he added with a smile. Focast Châteaubriant exports 60% of its production - mainly to Italy, Belgium, the Netherlands, Switzerland, Finland and the United States. Its principal customers are Wartsila, Man, Anglo Belgian Corporation, Guascor and more. The foundry employs 70 people. "Aside from the administration centre, our production centre is split into four sections: melting and preparation; mechanical coring; manual coring, and finishing, All the components move through these four stages" continued Christopher Pimor.

And to move the cast steel components, the company makes use of forklift trucks. "But the atmosphere inside a foundry is full of dust, because we use sand in our manufacturing process; and the grinding stage during which we polish the components also creates a lot of dust" he explained. This means that the forklifts are severely tested by the environment, "and the ones we had were getting old, so we needed to replace them" added Pimor. "We made a comparative study, and after looking at the technology and the environmental constraints, it was forklifts from Hyundai Material Handling that we chose. It is also true that they come very well equipped as standard, unlike other brands" stressed Christophe Pimor.

So Focast Châteaubriant got in touch with L2M (Logistique Maintenance Manutention), the Hyundai Material agent for Loire-Atlantique, and entrusted them with the selection of the right models.

Thus, the forklift trucks have been fitted with pre-filters to filter the air, preventing the engine from deteriorating too quickly. The oil sumps fitted as standard on all the models are also very good. The lighting inside a foundry is also very important: gangways are narrow and very dark, "so the trucks are fitted with front and rear blue spotlights to ensure that they are visible from a distance". The trucks were supplied with solid tyres and the driver has excellent visibility from his cab; the trucks also needed to be very manoeuvrable, because the buildings are old.

Three forklift models at the heart of the foundry

That is how the 35DA-9, 20D-9S and 110D-9 models made their appearance at the foundry. At work for some ten hours a day, each truck works in its own dedicated area. The 110D-9, a forklift truck with a load capacity of around 16.2t, is tasked with moving the heaviest loads; it is deployed mainly at the end of the production cycle, and is outdoors much more often than the other two, "and it is certainly the one that is subject to the most difficult environments".

The 35DA-9 forklift truck, with a load capacity of around 4.7t, operates more or less within the same area as the 110D-9, but tends to stay inside more. It moves around more easily everywhere inside the foundry, and it carries lighter loads. And finally, the 20D-9S, with a load capacity of around 3.2t is used more to carry components to the cooling section - it runs back and forth between the finishing and cooling sections.

In summing up Christophe Pimor said:

There are still some ageing forklifts at Focast Châteaubriant "which we also need to replace, and we have already made our choice. The new ones will come from Hyundai Material Handling. All that remains is for our board of directors to release the funds," concluded the maintenance manager.